The dynamic probe test involves driving a solid 90o cone on the end of a rod string into the ground using a drop hammer and counting the number of blows per 100 mm. DPSH stands for dynamic probe super heavy, which is a specific type of dynamic probe test that uses a hammer with the same weight and drop height as the Standard Penetration Test (SPT) and the same size diameter cone (50 mm). The SPT test, however, is only conducted over a total depth interval of 450 mm, whereas the DPSH is a continuous test performed from the surface until it reaches refusal. In effect, this test is like a continuous SPT test. This has the advantage that it doesn’t ‘miss’ information over the depth intervals between the tests as the SPT does.

As the DPSH test is progressed, torque readings are taken at regular depth intervals to provide a measure of skin friction on the rods. The resulting torque measurements can then be used to correct for any skin friction effects, so that the blow count relating only to the cone resistance can be estimated. The corrected DPSH blow count values (N100) can then be correlated to an equivalent SPT N60 or used to determine the dynamic cone resistance (qd). The qd can be compared to the Cone Penetration Test (CPT) cone resistance, qc.

The test is a relatively quick and inexpensive test that can be operated from a small rig without the need for anchoring. It is still a relatively crude test and the results provide an indication of the ground conditions rather than providing soil parameters that can be relied on for design purposes. It is a good test for establishing the depth to a rock surface or for providing rough ground profiling to help establish harder and softer layers.

At Ground Investigation Ltd our small tracked Pagani CPT rigs are set up to do DPSH testing, as well as CPT testing. In this way, if gravel layers are encountered during a CPT test that can’t be pushed through, we can swap over to DPSH to drive through the gravel layer and then recommence the CPT test; all in the same set up. This allows us to continue through gravel layers as well as obtain some information about those gravel layers.

The testing is undertaken in general accordance with ISO 22476-2 Dynamic Probing. 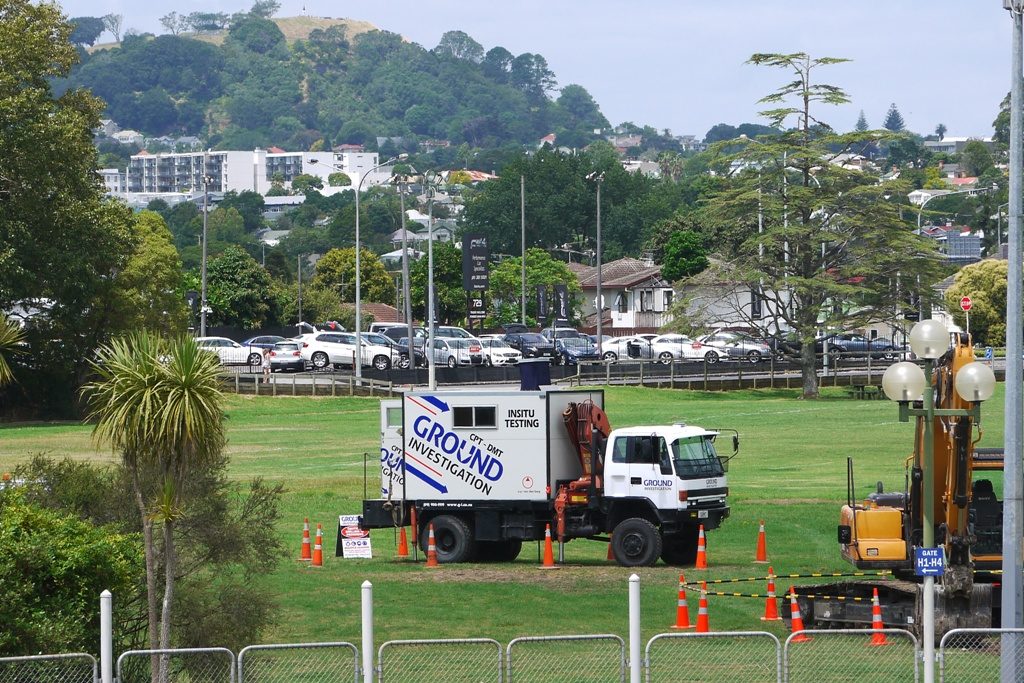 We have worked on many Watercare Projects, such as the Central and Northern Interceptor (CPT and SDMT testing), Hunua No. 4 Water Pipeline (Borehole sampling and dynamic probing), Mangere BNR (Biological Nutrient Removal) Facility Upgrade (CPT and SDMT testing) and various other upgrades to the Mangere, Rosedale and Papakura wastewater treatment plants and many pipeline schemes throughout Auckland.